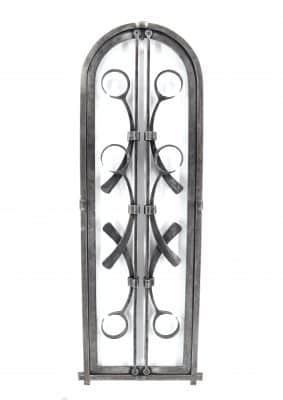 from Core to Surface

The “Portals” series is an ongoing project that started in 2015 and is a direct result of my client meetings for architectural metalwork. When commissioned to design a piece for a home or landscape my goal is to create a unique, contemporary form. I try very hard to not pull ideas from things I’ve found in previous research or from my contemporaries. This leads to exciting new concepts and shapes I want to develop further. During the presentation, however, some clients aren’t confident in their own decision-making even if they are enthusiastic about the ideas presented in my drawing. This lack of confidence can lead to diluting a design into something closer to what they’re familiar with or shelving the concept altogether. It's difficult to set aside these shapes, leave them as a drawing in a folder and move on. I have to resolve their place in the world and an arched window grille is a common framework to work within. As an admirer of architecture, I find a simple archway relatable and a familiar context to bring my deserted designs to physical life where they can fully be understood and assessed.

Andrew Kyte (b. 1977) is a Michigan-based designer and blacksmith whose primary focus is contemporary forged metal work.

Andrew was first introduced to forged metal work while working for a local jeweler and studio silversmith. He was fascinated with the direct metal processes used in jewelry but found the scale limiting. Realizing he was more inclined toward the larger scale work like fabricated candle holders and raised vessels his eyes soon became trained on forged ironwork in architecture. He sought out local fabricators and blacksmiths and worked in several shops gaining a solid skill set. Again he began thinking bigger and the idea of traveling the world to work with specific studios and artists began. For the next eight years, Andrew spent time in San Francisco, Washington DC, New York City, and Germany working for some of the best in their field. During this time he studied a broad range of design and understood how masters of their craft approach concept, design, and execution in their work.

Coming full circle, and back home to Michigan, Andrew now is the owner/operator of Kyte Metalwerks. His business is focused on the design and creation of custom furniture and fine architectural metal work. Andrews’s work can be found in the Washington National Cathedral, the Henry Ford House, the Inglis Estate, the Gerganoff Home, and many others. 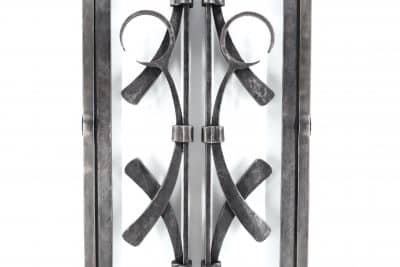 Scroll to Top
YOUR CART