Born in Easton Pennsylvania, Stefan grew up passionate about art. As a senior in high school, he was selected to the Pennsylvania Governor’s School of the Arts, and graduated with 9 credits in Art History from Lafayette College.

Granted a scholarship, he attended Temple University’s Tyler School for the Arts in Philadelphia. Stefan established himself as a woodworker and fine furniture craftsman, under the name ‘Open Easy”, in Brooklyn, New York. Living and working in the city, he became an avid collector of books, artwork and amassed a large library and African art collection. While in New York, he also curated numerous art shows and auctions. No matter the medium, Stefan was a voracious learner, and always strived to learn from masters of their craft. He studied and worked with Peter Galbert, Roy Underhill and Peter Ross among many others. After years of research and delving into blacksmithing, Stefan moved to Warwick, New York to work at Center for Metal Arts, which had recently come under the leadership of Patrick Quinn. During his time there, Stefan worked as a shop assistant, continued his work with both metal and wood, and became an integral part of the growth and development of Center for Metal Arts.

Scholarships in memory of Steve Bondi and Russell Jaqua, both artists who helped pave the way for modern American artistic forging.

Steven Bondi, active in the forging community from 1974 until his passing in 2004, had a strong impact on the birth of artistic forging in America that began in the 1970’s. With an MFA degree in sculpture from Virginia Commonwealth University, and a Bachelor of Arts degree from Alma College, Steve was able to bring his education and practice as an artist into the forging community. After a trip to Italy in the mid 1970’s to visit and work with Tony and Simone Benetton, Steve came back to America and attended a historic national artist blacksmith conference in Carbondale IL with Knowledge and inspiration about the craft of forging that quite literally changed the landscape for artistic American Forging. 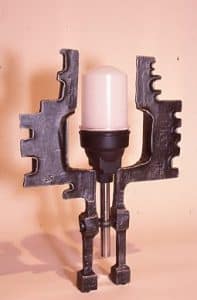 We’re honored and grateful to remember Stefan, Steve, and Russell through generous donations to the Center for Metal Art’s Scholarship fund.

Thank you for your interest in our Scholarship program! Make sure to read all the information before applying. We will contact you two weeks after the application due date to notify you of our decision and any relevant details. As we only have a certain amount of scholarships, we cannot guarantee everyone who applies will receive one. With this being said, our staff will take serious consideration of each application.

Students that received a scholarship and can no longer attend their workshop will forfeit their entire scholarship amount including any travel or food stipends. If the student paid separate housing for their workshop, our CMA House refund policy will apply. Center for Metal Arts is not responsible for non-refundable or prepaid travel arrangements.

Come Forge with Us

Whether you’re a beginner or an expert looking to hone your skills, we have a workshop or an instructor for you. Check out our workshops to see what we have to offer.

All Workshops
Support Our Work
Cart
Checkout - $0.00
Scroll to Top